The Dangerous Globe is saddened by the fact that this, our first news exclusive, had to be about such a heart wrenching subject, but the importance of it cannot be overstated. Never before have NHS Trusts been involved in the management of funeral arrangements for non-viable fetuses, why has this changed and why now ?

The research and following report was wholly conducted by AnewUK, and we thank them for giving us the opportunity to be the first to bring it to your attention.

Covid Vaccines – are they responsible for the new phenomenon of NHS Trusts dealing with Funeral Arrangements for NVF’s?

Back in early August, during an email exchange with John O’Looney, Funeral Director, Milton Keynes Family Funeral Services, the new phenomenon of NHS Trusts handling funeral arrangements was raised by John.  This was particularly evident for stillbirths and infant deaths; the majority of which were being coded as non-viable foetuses.

We decided and confirmed to John that we would conduct, under the legislation provided for within the Freedom of Information Act (FOI), research into how widespread this new phenomenon was, and that we would where possible, seek to outline the main causes of death along with the Covid 19 vaccination status of the mother.

The findings, whilst not proving correlation vs causation, are extremely concerning and require further investigation to provide a definitive link. That’s next on the list.

At the same time as running this initial research, we had been preparing an article for full publication, however, due to the findings so far, we have decided not to publish the full article until such time as we can dig deeper into this.

The majority of the 53 NHS Trusts who responded DID NOT record this information. 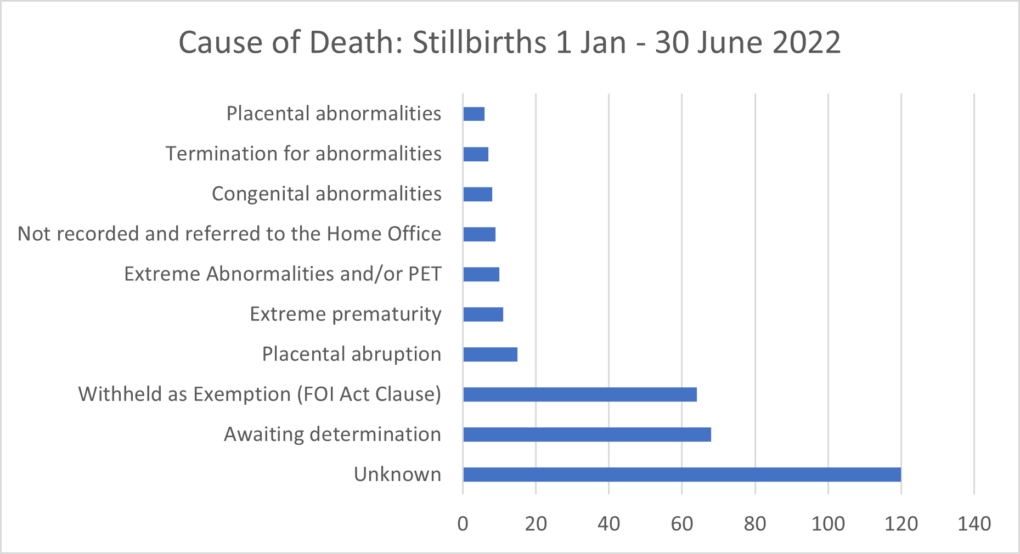 The majority of the 53 NHS Trusts who responded DID NOT record this information.

We also asked the same set of questions in relation to the 3-6mth old infant group. This group has generated little data to date.

Whilst you may look at these results and think, well, some are normal, and yes, we agree they are, but why are so many listed by those NHS Trusts shown as being ‘unknown’?

More importantly, why are so many NHS Trusts dealing with the funeral arrangements for these lost souls? What is it that they don’t want funeral homes and undertakers to see? Abnormalities? Are we looking at the beginning of something much more sinister than Thalidomide considering the number of childbearing age women who have had the Covid 19 vaccine?

One NHS Trust dealt with the funeral arrangements for all the stillbirths and infant deaths (as provided in the response to our questions) on the NHS grounds!

Under what medical code were some losses not recorded, yet the information appertaining to those lost souls, then sent to the Home Office?

With regards to the Covid 19 vaccination status of the mother, so many of those NHS Trusts who responded don’t keep records of this. There is no consistency across the NHS with regards to this, yet we’ve been conditioned to test, test, test for Covid 19 and to take the vaccine, not once, twice but three times (as of the timescale of our research), and now to take a fourth. With something so crucial, there seems to be no issue regarding this for most of those NHS Trusts who responded.

We can only assume that due to the extremely high numbers of ‘Unknown’, ‘Awaiting determination’ and ‘Withheld as exemption’ that there is much more to expose than this first glance has revealed.

26 July 202112 August 2021 Bloemenstein Whistlehuizen
DISCLAIMER: The views, thoughts and opinions expressed in the following article belong solely to the author and not necessarily to
Featured Society

Reasons to be hopeful